My mother-in-law’s visit was super brief! I thought we were going to spend the entire day together.  It turned out, we only spent lunch and dinner together eating out.  During the in-between time, she jetted off to sightsee with her fiancé.  On the way to the city, they saw traffic on the Bay Bridge.  The traffic in the city was so bad that they couldn’t make it to the Golden Gate Bridge so they turned back around.  Bummer! 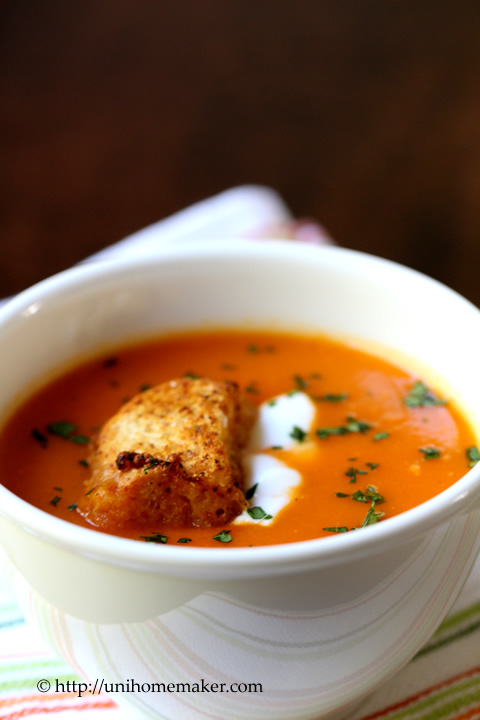 We had Japanese food for lunch and Korean food for dinner.  The Korean restaurant we went to was a huge disappointment, even though Yelp says otherwise.  I hate trying new restaurants hoping the food would be good but ending up tasting bad.  I was relieved to be back at home cooking again.  This soup hits all the right spots –comforting and soothing.  Happy Thursday! 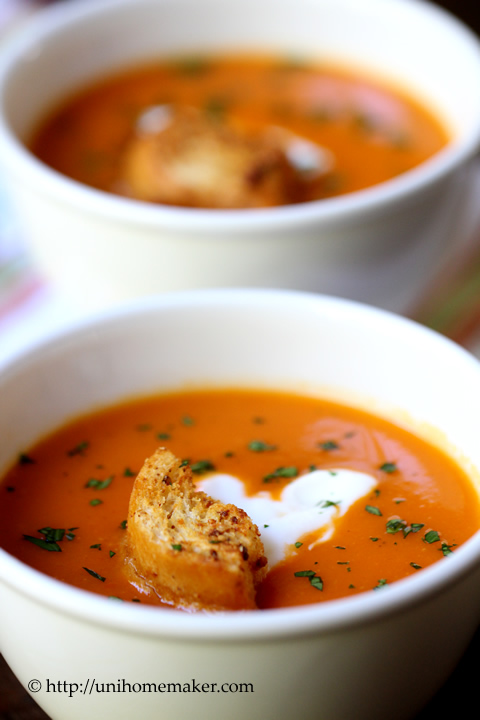 In a large Dutch oven over medium heat add olive oil, chopped onions, carrots, garlic and thyme.  Cook until onions are translucent, about 5-7 minutes.  Add wine, chicken broth, potato, sugar and bell peppers.  Bring the soup pot to a boil and reduce to heat to low.  Simmer for 30 minutes or until potatoes are tender.  Remove the pot from the heat.  Using an immersion blender, purée the soup until smooth.  Season the soup with salt and pepper.

Ladle the soup into bowls. Dollop a tablespoon of sour cream in the center of each bowl and top with croutons.  Sprinkle chopped parsley over top and serve. 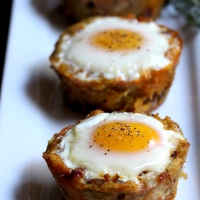